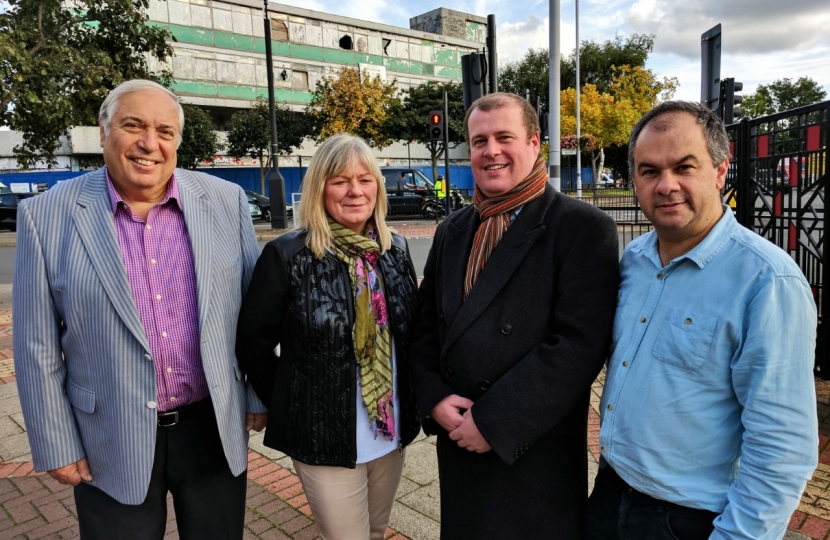 Following the positive news regarding the demolition of Victoria House a few weeks ago, Councillors from Sutton Conservatives today made representations on behalf of local residents at a Design Review Panel which included residents, architects, council officers and the developer.

Conservative councillors from Nonsuch, Worcester Park, Cheam and Stonecot wards saw and commented on a presentation of revised plans for the development at North Cheam crossroads by architects which set out a proposed new design fitting in with the character of the buildings in the surrounding area as well as a reduction in the building’s maximum height which had previously prompted serious concerns from resident associations.

In May, at a previous design panel, the proposed plans would have seen an eight-storey block, whereas the new design put forward today is set at a maximum of seven storeys. There is an art-deco feel to the frontage of the building with balconies giving off a curved effect. Suggestions with regards to additional art-deco features have been put forward by councillors for the developer and their architects to take away, however the discussion was a constructive one for all parties who were involved.

Commenting on what he saw at the panel this morning, Cllr Tom Drummond, Leader of Sutton Conservatives, said:

"Today's new design that was presented to us represents another step forward following the developer making a start on the demolition of Victoria House.

"Local residents overwhelmingly put their faith in their local Conservative candidates across this area in 2018, and as Councillors we have worked hard to repay that faith, including working tirelessly with local residents, CHAPRA, WPRA and local MP Paul Scully to bring a close to the sorry saga of Victoria House which has been a blight on our landscape for decades.

"There is still a long way to go in terms of the planning process and much more to do in finalising the design, but from what me and my colleagues have seen from the revised design plans, we are encouraged that a lot of feedback from residents has been taken on board by the developer and architects, so that the new building can become a centre-piece of the North Cheam crossroads.

"As councillors for the North Cheam and Worcester Park area we will continue to liaise with and make representations on behalf of the local community to give our area a development it deserves and can be proud of.”

At the 2018 local elections in Sutton, the political landscape in the North Cheam and Worcester Park area changed significantly for the first time in decades, with 7 of the 9 Lib Dem Councillors being replaced at the ballot box by Conservative Councillors.

We now find ourselves in a position where policies are being announced before the papers for a committee have even been finalised. I believe this goes against every informal convention of this Council.