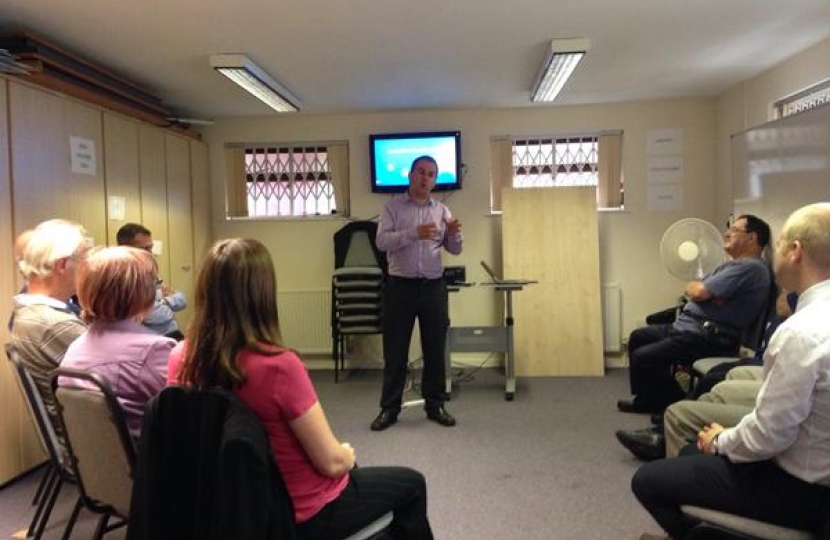 The event was opened by the Chair of the Sutton Conservative Policy Forum, Ben Pearson and was taken by the Conservative MP for Sutton & Cheam, Paul Scully.

Paul began by updating residents on what progress he has made on his election pledges since being elected.

The first point was about St Helier Hospital. Paul told the audience that he had been given the assurance that the A&E and Maternity Units at St Helier were safe for at least the next five years. He also warned against the Lib Dem 'Save St Helier' petition, which is not fit for purpose. St Helier is always the South London Hospital under threat as it has trouble recruiting staff, who are cautious of joining a hospital that seems under constant threat, and is based in a crumbling old building that is only going to deteriroate further. Our focus should be on making sure we have a world class A&E and Maternity unit.

Paul then moved onto talk about schools, which there is a severe shortage of places for following the Sutton Lib Dems failure to build a new school to cope with the baby boom. Paul advised that the Lib Dems purchased part of the Sutton Hospital site, which was then found to be 80% too small, leaving an £8million black hole in the public purse. Instead, the Education Funding Agency (EFA) agreed with Paul that the best site for a new school would be on Rosehill Recreation Ground, in the part of the Borough where there is the most demand. Progress on building that school should begin shortly.

With the A&E and Maternity Units secure at St Helier and a new school being built on Rosehill, Paul then moved onto talk about his third election pledge, which was to improve Sutton High Street and the Local Economy. For this, Paul has launched the 'Vision for Sutton Town Centre' survey, and we are encouraging as many people living in Sutton as possible to tell us what they think about Sutton.

Paul gave a short presentation on the High Street today, how it sits between neighbouring town centres and shopping centres such as Croydon, Kingston, Wimbledon, Bluewater, Westfields, etc, all of which offer plenty of choice that entices Sutton residents away from their own Town Centre. He spoke briefly about how Sutton is divided into the Village, Exchange, Civic and Station quarters, and the current problems faced in each. Finally, he discussed the most major developments already in the pipeline in Sutton, namely Subsea 7 on Brighton Road, Sutherland House, Sutton Station, Sout Point, L&Q on Sutton Court Road, Time Square, Sutton Superbowl, the Old Gasworks and the old Burger King.

Discussions then opened up to the floor to hear people's views on the High Street. Discussions first centred around the problems Sutton faces in trying to improve and expand its appeal. Issues such as parking and access to the High Street were of considerable concern, as there is a lack of free parking for the High Street and being a mile-long stretch enclosed in a one-way system means that Sutton becomes a place that many people just pass through. The point was raised that Sutton was also less well connected then other London Boroughs, and how transport improvements such as the Tramlink extension and the London Overground extension, and perhaps even extending the Northern Line down from Morden or the Bakerloo line across from Croydon (if they successfully bid for it), could improve access to the Town Centre and attract more people into it.

It was raised that Sutton is lacking its own identity and faced the problem that even aesthically it was not very appealing, whilst neighbouring High Streets, especially Kingston, Wimbledon and Epsom, are much more appealing. The leader of the Conservative Group on Sutton Council, Cllr Tim Crowley, also raised the issue of how difficult it is to redevelop Sutton, due to the large number of landlords that own parts of the High Street.

It was further debated about how Sutton would cope with the inevitable population growth. There are many new housing developments already in place, but the largest are only going up around 20 storys, whilst advice from the Greater London Assembly is that we need to be going up 30-40 storyes to cope with the demand for Housing and the eye is on the Town Centres to fix the problem. Suggestions were put to the group to build housing above the shops on the High Street and to make Sutton a shorter, but more compact and convenient place to shop.

Finally, residents discussed how they would like Sutton Town Centre to look and what brands they would like to see come to Sutton. There were many in favour of creating idyllic squares, with al fresco dining overlooking a central fountain or water feature, appropriate for locations such as Trinity Square or the Village Quarter. Many residents were also in favour of bringing more cafes and restarants to Sutton, as well as more upmarket shops such as Cafe Rouge and John Lewis. More generally, it was largely agreed that better shops would attract more people.

The first Policy Forum of the new Parliament was a great success and has helped Paul Scully MP shape what he is going to ask residents of Sutton, Cheam and Worcester Park about the High Street. We will be collecting people's views on the High Street over the coming months and putting together a Vision for Sutton based on what you tell us you would like to see here, so take part in shaping the future of our Borough.