REVEALED: The Lib Dems have failed on every single manifesto pledge 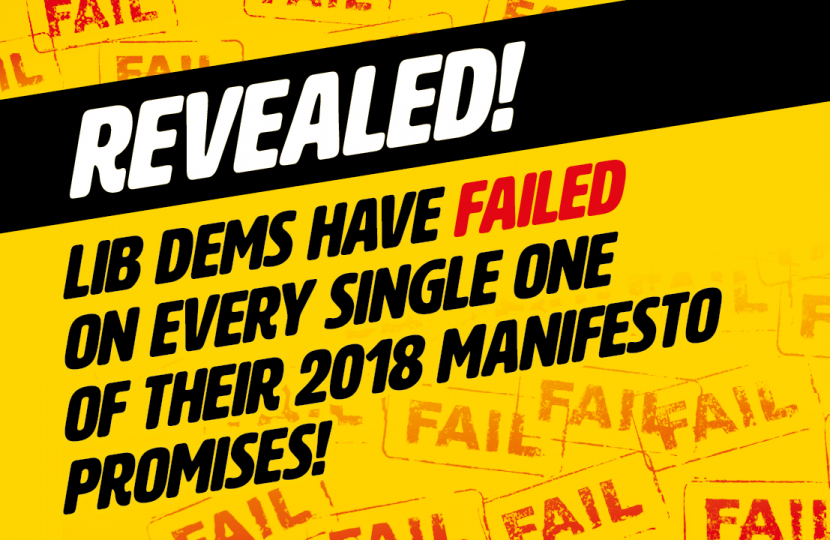 Today, a report has been published which demonstrates that the Lib Dems have failed to deliver on every single one of their 2018 manifesto pledges. Every. Single. One.

A copy of the report entitled "A record of failure, a promise of more", can be viewed by clicking the link below.

It demonstrates that the Lib Dems have failed to prove that they have achieved any of their promises to the people of this Borough since 2018. Either there is no evidence of them taking any action on the pledge, breaking the promise altogether, taking action contrary to the pledge, taking credit for things that had nothing to do with them, and much more!

Councillor Tom Drummond, Leader of Sutton Conservatives, said: “This confirms what many residents in Sutton have been telling us for years – the Lib Dems are failing Sutton.

“They are now asking residents for 4 more years to run this Borough, when they have failed to deliver on every single one of the promises they made to the people of this Borough last time.

“They simply cannot be trusted to stand up for Sutton anymore, so no wonder more and more lifelong Lib Dem voters are backing our plan to take Sutton forward together on 5th May.”

Paul Scully, MP for Sutton, Cheam and Worcester Park, said: “When people go to vote for their local councillors on 5th May, they will be choosing who runs this Borough for the next four years.

“That is four years of decisions about your bin collections, parking, road and traffic schemes, street cleaning, the environment and much more.

“The Lib Dems’ only message to the people of Sutton now is that they are ‘not Tories’. Nothing about their plans, nothing about their record, just a cynical attempt to get re-elected at any cost. Don’t be taken for fools. Back Sutton Conservatives on 5th May.”

Elliot Colburn, MP for Carshalton and Wallington, said: “One of the most common, if not THE most common thing residents raise with me are problems caused when the Council fails to do their job properly, so to hear the Lib Dems have failed to deliver on any of their promises is not a surprise.

“I have been truly shocked by the arrogance and out-of-touch attitude of Lib Dem councillors since becoming the MP. They do no deserve four more years in control of Sutton Council.

“Send them a message on 5th May and vote Conservative for a brighter future for our Borough.”