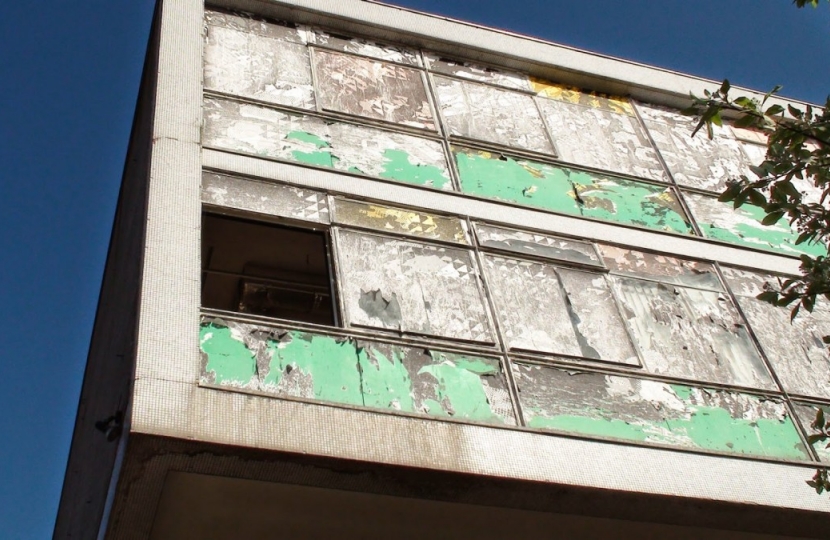 Victoria House, a familiar unsightly building in North Cheam, will hopefully soon be developed on.

Sutton Council and the developers hoping to build on the Victoria House site, HomeGroup, have successfully negotiated with Ladbrokes that they vacate the site, meaning demolition works are now able to take place, and a planning application is expected to be submitted immediately before or after the New Year.

In response to an email sent by Paul Scully, Conservative MP for Sutton & Cheam, the Head of Development at HomeGroup gave us this update:

"I think when I discussed the scheme at the consultation we were in negotiations with Ladbrokes to agree a premium to buy out its lease. I can confirm that we were successful in doing so and Ladbrokes moved out of the premises at the end of September giving us full vacant possession of the site.

"We received some useful comments at the public consultation event and sessions we held around the same time with Members as well as formal pre-application meetings with planning officers.  The main areas being raised at the time and our response to each were -

"- building height - we presented a scheme of up to 12 storeys and have responded to comments by redistributing the mass of the building so the revised proposals are now max 10 storeys. In doing this we have lost a couple of units but managed to re-accommodate some of this space in other parts of the building.

"- car parking in the local area - there was concern at the level of parking provision in an area already considered to be lacking in available parking spaces. We have managed to, through design development accommodate a higher number of parking spaces in the podium under the building and the total number of units has reduced improving the parking ratio. We have also undertaken parking surveys in the area to determine factual on street parking data and can now evidence that there is capacity in the locality. It is also important to note that the demographic that will be attracted to living in the modern high quality apartments we propose is not the same as the local demographic and we expect far lower car ownership and greater use of sustainable transport - this is something we will explain further in our planning submission.

"- aesthetics - the materials presented at consultation (predominantly) brick were considered too monolithic and were not well received. We agreed. We have subsequently developed the designs substantially and now have a detailed facade design that introduces a more varied pallet that has the effect of breaking up the mass of the building. A group of the local community wanted to see the Art Deco styling seen in some of the other buildings at the cross roads reflected in our building. We were super keen to keep our design true and not become pastiche but have introduced a nod to that styling in certain elements of our design.

"In terms of next steps, we have formal pre application second meeting with planning officers this morning and will present the changes in response to earlier sessions. We also have to discuss some procedural protocols. On 11th November we will brief Members on where the designs have progressed to. It is also our intention to present again the changes to the local community and are finalising these arrangements with assistance from the council. Our intention is to complete the above and submit our application before the end of the year but I would say that it is important to me that the submission is right and a slight delay to submission to ensure that the scheme is right will always be our approach."