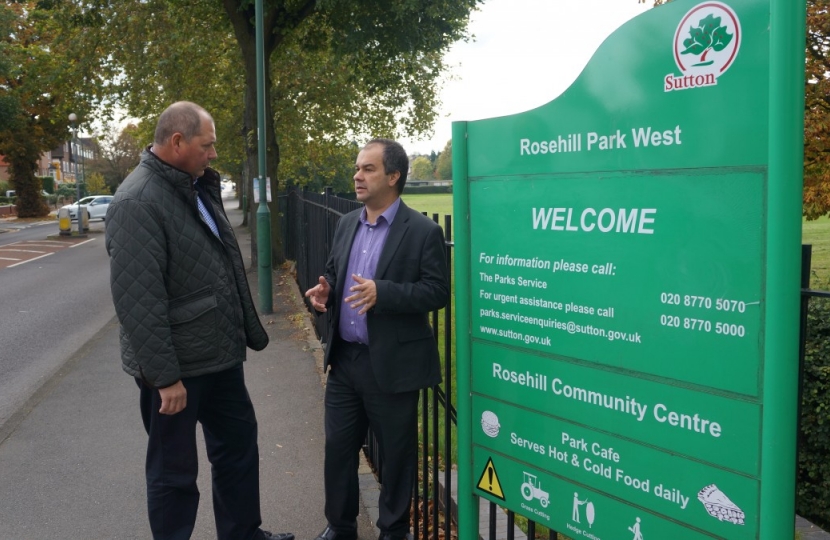 Paul Scully, MP for Sutton, Cheam and Worcester Park, Elliot Colburn, MP for Carshalton and Wallington, as well as the Conservative group on Sutton Council have welcomed the announcement from the independent Planning Inspectorate that will allow a secondary school as well as a special educational needs school to be built on a disused all-weather pitch site in Rose Hill.

This site at Rose Hill was identified by the Department for Education as the best location for satisfying local demand for school places. Over a considerable period of time the London Borough of Sutton had fallen behind in being able to provide sufficient future places for secondary school pupils and there was a large risk of pupils being placed in temporary accommodation.

This looming danger was highlighted by the Sutton Conservatives as far back as the 2014 local election campaign, however a year later the Liberal Democrat administration inexplicably refused to engage with the Department for Education about working towards a potential site in Rose Hill. The site lies in the Sutton North ward, the ward which is currently represented by the Leader of the Council, Cllr Ruth Dombey.

The poor situation was compounded when in September 2019, Sutton Council’s planning committee voted against the secondary school being built by 6 votes to 4. This left 320 places needing to be filled and the current schools allocation being full.

Paul Scully MP said upon hearing the news from the Planning Inspectorate:

“It is a great relief that the right decision has been made regarding the two new schools being built in Sutton. I was all too aware that for far too long our Council were dragging their heels on this issue and pleased it has now been addressed independently.

“Sutton has a fantastic set of local schools and I’m sure the two new schools that are finally to be built will be worthy additions to our borough.”

“It is regrettable that we have spent so much time on making a decision which impacts so many families and children across our borough. However those families who would have been facing limbo in the future can have some assurance that their children will have a school place in Sutton.

“It is pleasing that within this development we will also have included a Special Educational Needs school that will serve over 50 pupils.”

“The Liberal Democrats on Sutton Council are failing to discharge their responsibilities to provide sufficient school places for our borough. Now, the independent Planning Inspectorate has had to step in to ensure that we can continue to uphold our excellent reputation for education locally.

“I am glad that they have listened to our calls to approve Rosehill – the most appropriate site for a new secondary school, sixth form and SEN school in our borough. Now, we need to get on with the job and build this school so that future pupils in Carshalton and Wallington, and elsewhere in the borough, can receive the education they deserve.”

You can see the decision notice here.

After decades, Victoria House is nearly down!

Since being elected in the North Cheam area in 2018, Conservative Councillors have been working tirelessly with local residents, local MP Paul Scully and our local resident's associations to get the eyesore Victoria House taken down, and now it's nearly done!