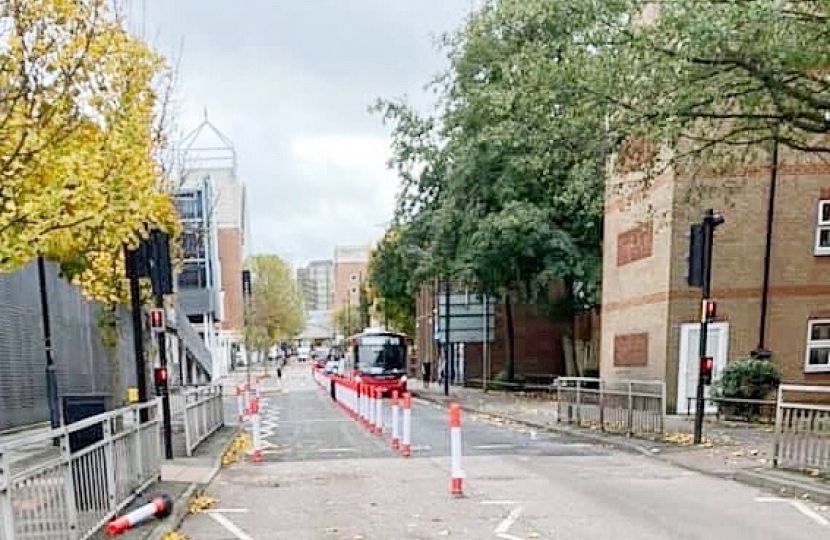 Official figures revealed what has been clear for months, that the £57,000 scheme is not being used. Between 7am and 7pm, there were on average just 23 people using the bike lane on St Nicholas Way, as frustrated motorists trapped in stationary traffic stared at the empty lane. Ambulances and Police have repeatedly been trapped, responding to emergencies.

The town centre cycle lane was first installed last May using cones, but it was soon obvious that there was little public interest in using it. Instead, there was great public anger as the town centre traffic ground to a halt. In September the Lib Dems replaced the cones with orange plastic poles (“wands”), believing this would solve the problem, insisting it be given a further 6 month trial.

But today, long after it was obvious to everyone else, they have accepted that it doesn’t work, no one’s using it, and it needs to go.

“I’m glad they’ve made the right decision. But like you, I’m stumped why it took the Lib Dems 8 months to notice that no one’s using it – it runs right under their window!

“What we don’t yet know is what changes they’re planning to the other traffic schemes. Is this the start of a trend, or have they sacrificed the worst scheme to keep the rest?”

Sutton’s Conservative Councillors and both MPs have consistently said that encouraging walking and cycling is important if we are to improve air quality locally and the local environment, but that schemes should be community-led and ensure that there aren’t knock-on effects, such as the queuing traffic that has been seen across Sutton as a result of low-traffic neighbourhoods (LTNs) being imposed on residents.

The Lib Dem council has also created a public backlash over its arrogant approach to objections, denial of problems, and their biased consultation which only allows positive responses. Even people who are sympathetic to the idea have grown tired with the council’s behaviour.

Our 3-step plan to bring sanity and fairness: